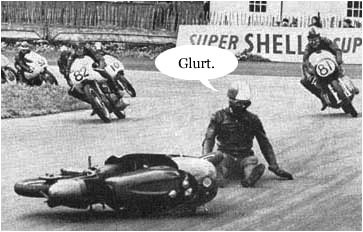 GLURT was an independent manufacturer and mail order distributor of subversive, counterculture and bootleg band stickers based in Kitchener, Ontario. The first rolls of stickers were produced in the fall of 1999, and the last batch rolled off the thermal-transfer press and into our pocketses in the summer of 2001. Glurt Stickers were an exciting blend of political commentary and grade 4 toilet humour...a celebration of lewdness, intoxication, spicy curry and obscure cultural juxtaposition.

Average citizens often did not know how to react upon first seeing a Glurt sticker adorning their neighbourhoods, public washrooms or perhaps even found on the backs of their own heads if they weren't paying attention in the bar.

Who was this mysterious Randy Benders? Why were there so many free chickens being advertised near the University? Was it possible that a package of cookies from the grocery store may have actually contained Swede Dung? And dammit, how dare the Royal Bank increase service fees just to fund their corporate Christmas party!

Thus was the the plight of the average citizen in modern society, and it was the solemn duty of the followers of the Glurt Stickery to strategically bewilder and mock those who were not.

At the peak of production, Glurt was mailing out 30 packages a week to adhesive connoisseurs in Canada and around the world. Revenue of donations of stamps were minimal, but then again so were production costs. Everyone wins!